The City by the Bay is becoming a more expensive place in which to live. The great economic vitality of San Francisco, being a center of finance and commerce on the West Coast, has led to the demand for more luxury in people’s homes and lifestyles. Condominiums and other more affordable yet luxurious housing options are, unsurprisingly, on the rise as of late, with multiple developments currently peppering the city.

These are made possible, in part, by the expert contractors who built them. The fourteen contractors featured here are the cream of the crop, building and delivering condos to the highest of standards. Principals Chinsoo Kim and Garrett O’Donoghue established K2 Builders in 2006. Proud of being “accused of being perfectionists,” the firm has completed a wide range of projects, from new residential and commercial construction, to renovations and seismic upgrades. K2 is a Certified Green Builder by Build it Green, and is a proud and active member of the San Francisco Coalition for Responsible Growth, the San Francisco Residential Builders Association, and the Western Regional Master Builders Association

K2 constructed 1601 Larkin Street, a condominium and apartment complex boasting 27 units. The building is designed by Stanley Saitowitz, and it boasts fine amenities that include in-house maid service, laundry, and concierge services. 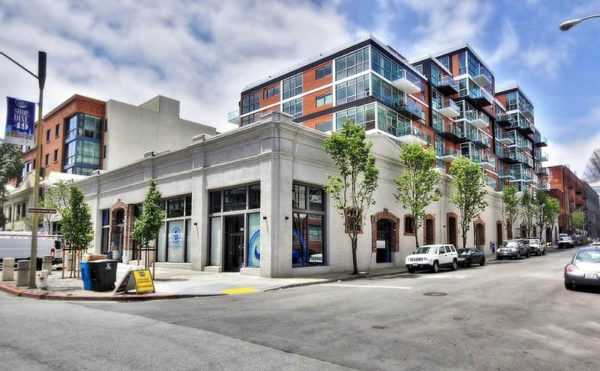 Based in Novato and founded by President Paul Thompson founded in 1989, Thompson Builders is a general contractor focused on commercial, residential and institutional sectors. The firm has won numerous awards over the years, including the CEA Project of the Year Award and the International Partnering Institute Project of the Year Award. Some of Thompson’s major projects include the footings for the Yerba Buena Island SF-Oakland Bay Bridge, the Manteca Big League Dreams Sports Park, the San Jose Happy Hollow Zoo, and the San Francisco Cadillac Hotel.

Thompson Builders was responsible for building the 72 Townsend Street condominium. This seven-story complex is built on top of a 28,000-square-foot, historic warehouse that survived the 1906 Earthquake. This in-fill development boasts 74 residences, 5,000 square feet of commercial space, and parking for 78 vehicles. Rooted in Silicon Valley, Devcon Construction is a designer-builder and former developer founded in 1976. President Gary Filizetti currently leads the company, starting with the company as vice president of construction in 1980 to help Devcon transition from developer-contractor to designer-builder. An innovator in sustainable technology, the company boasts a long list of projects with LEED Silver, Gold and Platinum certifications, and a staff of more than 50 LEED APs. From the firm’s headquarters in Malapitas, the firm has since expanded with offices throughout California and Nevada, and projects in Oregon, Idaho, Texas and elsewhere. The firm has won numerous awards throughout the years, such as the SVBJ Project Awards, the Gold Nugget Merit Awards, the CEA Excellence In Safety Award, and the California State Senate Green Building Awards. CEO Robert Fisher started Fisher Development in 1971 as a residential builder-developer, his first project being a 60 single-family home development over 20 acres in Davis, CA. From that starting point, Fisher expanded his business to include retail, corporate interiors, mixed-use projects, multifamily housing, adaptive re-use of historic structures, sustainable construction, and independent schools. Fisher’s son, Alex Fisher, currently co-heads the company as President. The firm has been honored with a number of awards, including the ENR Best Projects Award, Superior Award for Design and Imaging, and CEA Most Improved Safety Program.

At 388 Fulton Street, Fisher built the Hayes Valley Condominiums, a complex with 69 units and a floor area of 53,000 square feet. The building was designed by David Baker Architects to fit today’s social and car-less lifestyle, and include amenities such as one-to-one bike storage, a panoramic rooftop retreat, lush private courtyard, styled work-lounge space and boutique sidewalk retail. For over 35 years, Palisade Builders has been responsible for some of the Bay Area’s prime developments, covering multiple sectors including commercial, retail, historic building renovation, and residential housing. President Douglas Ross founded the firm in 1989, and has since delivered more than 15,000 units of development. The firm was the recipient of a Golden Nugget Award in 2010 for the 555 YVR apartment complex in Walnut Creek.

Palisade built 140 South Van Ness, a mixed-use condominium complex primarily comprising of 212 residential units, along with 6 retail spaces and three levels of parking. The 11-story complex offers a panoramic view of San Francisco and a landscaped area with reflecting pool. Bosa Development is a Canadian builder-developer founded in 1987 with US offices in San Diego and Bellevue, WA. The firm began in 1966, when founder Natale Bosa co-established general contractor firm Bosa Brothers Construction. Bosa then expanded the business to development, thus establishing the company as it is today. Bosa’s projects can now be found across the Canadian and U.S. West Coast, from Calgary and Vancouver, to Seattle and San Diego. The firm was instrumental in jump-starting downtown San Diego’s revitalization, which was recognized when Bosa was inducted into the Urban Development Institute Hall of Fame in 2016, and was awarded the Founders Award at the 2013 Alonzo Awards.

Meanwhile, in San Francisco, Bosa completed three mixed-use condominiums in Mission Bay; Radiance, Madrone and Arden. Each of the three complexes offers outstanding amenities, private outdoor area, and retail and office spaces, all within a stone throw away from the San Francisco Bay Trail and Mission Bay Commons Park. The Radiance condominiums were among the first major condominium developments built in the U.S. following the 2008 Financial Crisis. Build Group is a San Francisco-based design-builder established in 2007. The firm is focused on project in multiple sectors, including residential, commercial, high-end retail, restaurants, hospitality, and institutional. The company currently employs over 400 professionals throughout California, making it one of the fastest growing private companies in the area. Build Group had been named by Engineering New Record as a Top Contractor, a Largest Commercial Contractor in the Bay Area, a Healthiest Employer, a Fastest Growing Private Company, and a Best Place to Work.

The development at 1075 Market Street, named Stage 1075, is being constructed by Build Group, slated for completion late in 2018. The eight-story, 94,000 square-foot complex is being built on the site of Grauman’s Imperial Theater, a former Vaudeville theatre, movie theatre and dance hall. Elements of the former hall was retained in the new residential complex to relive the past, including the restoration of the original stained glass window uncovered at the property as a focal point of the lobby. In addition to the 90 residential units, the building will feature restaurants, retail spaces, common areas throughout the roof, and second level courtyards. Since 1950, Nibbi Brothers has been at the forefront of the construction industry, delivering some of the most technically complex, iconic structures in the San Francisco Bay Area. The firm was formed by Marinio Nibbi, while his grandsons, President Bob Nibbi and Vice President Michael Nibbi, currently lead the company. The firm has won some of the most prestigious awards in the industry, such as AIA Housing Awards, the Building Industry Conference Board Achievement Award, the AIA Design Merit Award, and the ULI Award of Excellence. Established in 1932 as Moore & Roberts, James E Roberts-Obayashi Corporation has been building some of the most landmark structures in the Bay Area. During the 1970’s, the company completed numerous joint ventures with the century-old Tokyo-based contractor Obayashi Corporation, leading to a merger in 1978. This long history has lent Roberts-Obayashi the wealth of experience and expertise that would make them one of the most respected builders in Northern California. The firm has been honored with multiple industry awards including the Gold Nugget Award and AIA Honor Awards.

Roberts-Obayashi was responsible for building the Welcome Center and Blocks 50, 51, 53 & 54 of Hunters Point Shipyard. The project is consisted of 247 units spread over 305,000 square feet. The Welcome Center, meanwhile, is a modular construction with a total floor plan of 2,856 square feet. Charles Pankow Builders is a pioneering design-build firm based in Pasadena, with offices in Oakland and San Francisco. Pankow is one of the founding organizations of the Design-Build Institute of America (DBIA), having dedicated itself to delivering high-quality projects from inception and design to construction and completion, since the firm’s beginnings in 1963. Through the years, Pakow has won various awards, including the DBIA National Awards, the ENR Best Project Awards, and the ASLA Award of Excellence. In 1947, brothers Tom, Buck and Dave Plant opened a construction company at 1168 Battery Street. The company still stands to this day as Plant Construction Company, and the brothers’ first project, the conversion of a sunken wooden barge into a duck-hunting lodge, became the foundation for the firm’s extensive work history filled with complex projects. The firm is currently led by a team of Plant veterans, headed by President and CEO Chris Rivielle and Tom Plant’s son, General Partner David Plant. The company has won numerous awards, including the SFBT Best Rehab/Renovation of the Year, the American Institute of Steel Construction National Architecture and Engineering Award, and the Building Design + Construction Reconstruction Silver Awards. Plant has also been featured in ENR, Forbes and Architectural Record.

Trumark Urban entrusted Plant to convert the former University of the Pacific Dugoni School of Dentistry building into 76 high-end residential condominiums and townhomes designed by Handel Architects.The conversion included the replacement of the precast concrete exterior with a high-performance glass curtain wall, seismic upgrades, and interior improvements. The development is projected to receive a LEED Silver certification for its townhouses, and LEED Gold for the tower itself. Cahill Contractors was established in 1911 by Oakland-born civil engineer John Cahill with a mission to rebuild the San Francisco Area following the 1906 Earthquake. Today, John’s granddaughter, CEO Kathryn Cahill, leads the company with a portfolio that cuts across many markets and all kinds of construction. The firm’s experience, capabilities and financial strength enables it to pursue and deliver almost any size building project. Amongst its many recognitions, Cahill has received the AIA/HUD Secretary’s Award, and the SFBT Real Estate Deals of the Year Award. Lendlease USA is the wholly-owned American subsidiary of the Australia-based builder-developer Lendlease. Formed in 1979, the daughter company is currently headquartered in New York, with offices in San Francisco and 6 other cities including Los Angeles and Washington DC. The firm specializes in construction, development, and investment projects in diverse sectors such as mixed-use, commercial, institutional and infrastructure projects across the world. Outside the US, the parent company has won numerous awards in Australia, UK, and Singapore.

Lendlease was responsible for building the South Tower of One Rincon Hill at 425 1st Street. The tower was the first phase of the development, which included the demolition of the sites’ existing office building – the famed Bank of America clock tower and parking garage. The current building stands at 64 stories tall with a floor area of 762,000 square feet. The tower is built on a full-site podium with five levels of below-grade parking, amenity functions, and a five-story townhouse structure. Bill Wilson, Ross Edwards, Dave Boyd, and Miller Ream founded Webcor Construction in 1971 in San Mateo, with the goal of delivering projects with unmatched innovation, efficiency and personal involvement. In 2007, Webcor becomes the latest acquisition by Obayashi, a century-old Japanese general contractor based in Tokyo, and CEO Jes Pedersen has led the company since 2012. The firm has received a multitude of awards through the years, including the ENR California Contractor of the Year Award and the Golden Nugget Grand Award. Webcor is also a proud ISO 9001-certified firm since 2013, the only California-based general contractor to be so.

Webcor constructed the Harrison, the North Tower of One Rincon Hill at 401 1st Street. At 52 stories above grade and with an a floor area of 505,000 square feet, the shorter of the two towers boasts 319 units and below-grade parking for 151 cars. The tower received a LEED Silver certification from the USGBC. Another notable project is the Infinity at 300 Spear Street, a 1 million square-foot development that includes 654 condominium units, a fitness center, swimming pool, courtyard, lounge, retail space and a 5-level below-grade parking garage.